Here’s How I Called the CRASH in the Stock Market!

Early this year I was screaming danger from the rooftops,

letting people know that we were walking into a complete disaster zone,

and that the bear market was about to begin.

You can see from my nightly update headlines that I was searching for the top. 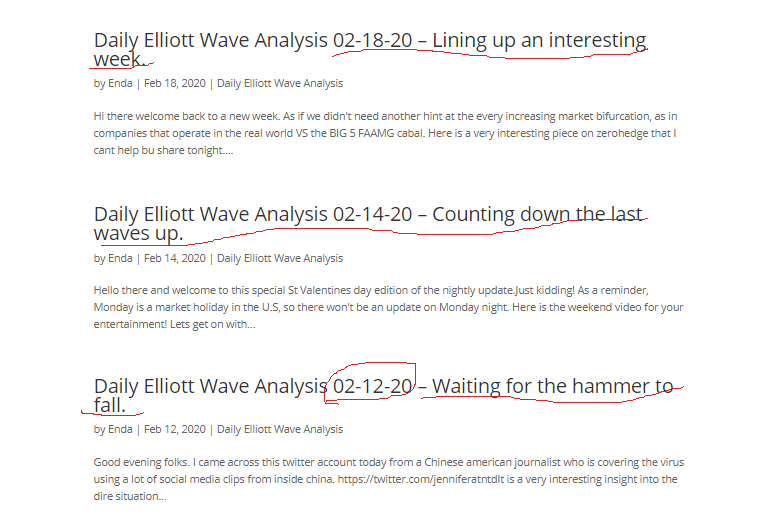 the S&P lasted a few more days and topped on the 20th of February.

Since those highs the markets have lost a whopping 36% each!

These declines have taken little more than a month to play out and may well be the beginning of a larger bear market.

Check out my weekend update from the 14th of February - where I was looking for the decline to begin!

So How did I see this coming?

On February 19th I released these charts;

calling for an immediate crash towards the lower trend line at 18000.

looking for a lower degree five wave move to begin the larger collapse.

We should see the price return lower tomorrow and accelerate into a possible third wave.A break of 28891 would greatly increase the chances of this bearish scenario.So lets see if we can reach that low tomorrow.

Tomorrow;Watch for wave 'iii' down to gain control and pull the price down below that initial support at 28891.

The wave count was pointing to a major crash dead ahead.

A crash which I spoke about this on my weekly videos also,

you can view them on the Bullwaves Youtube channel.

After all the warning signals I have given,

the crash finally began on the week of the 23rd of February.

And here is what happened so far.

The crash off the highs has been spectacular for sure,

but this crash is only the first leg down in what should be a much larger structure now underway.

If you want to track the development of this bear-market as it happens,

and get my nightly updates to help you prepare for the wild action that is to come!

See the NEXT BIG move before it even begins!

Where are YOU going when you DIE!

Jesus Gave us the Way to everlasting life:

(John 3;16) For God so loved the world that he gave his one and only Son, that whoever believes in him shall not perish but have eternal life.

For God did not send his Son into the world to condemn the world, but to save the world through him.

If you believe on Him, then you are saved.

Whoever believes in him is not condemned, but whoever does not believe stands condemned already because they have not believed in the name of God’s one and only Son.

Your ETERNAL LIFE depends on it!