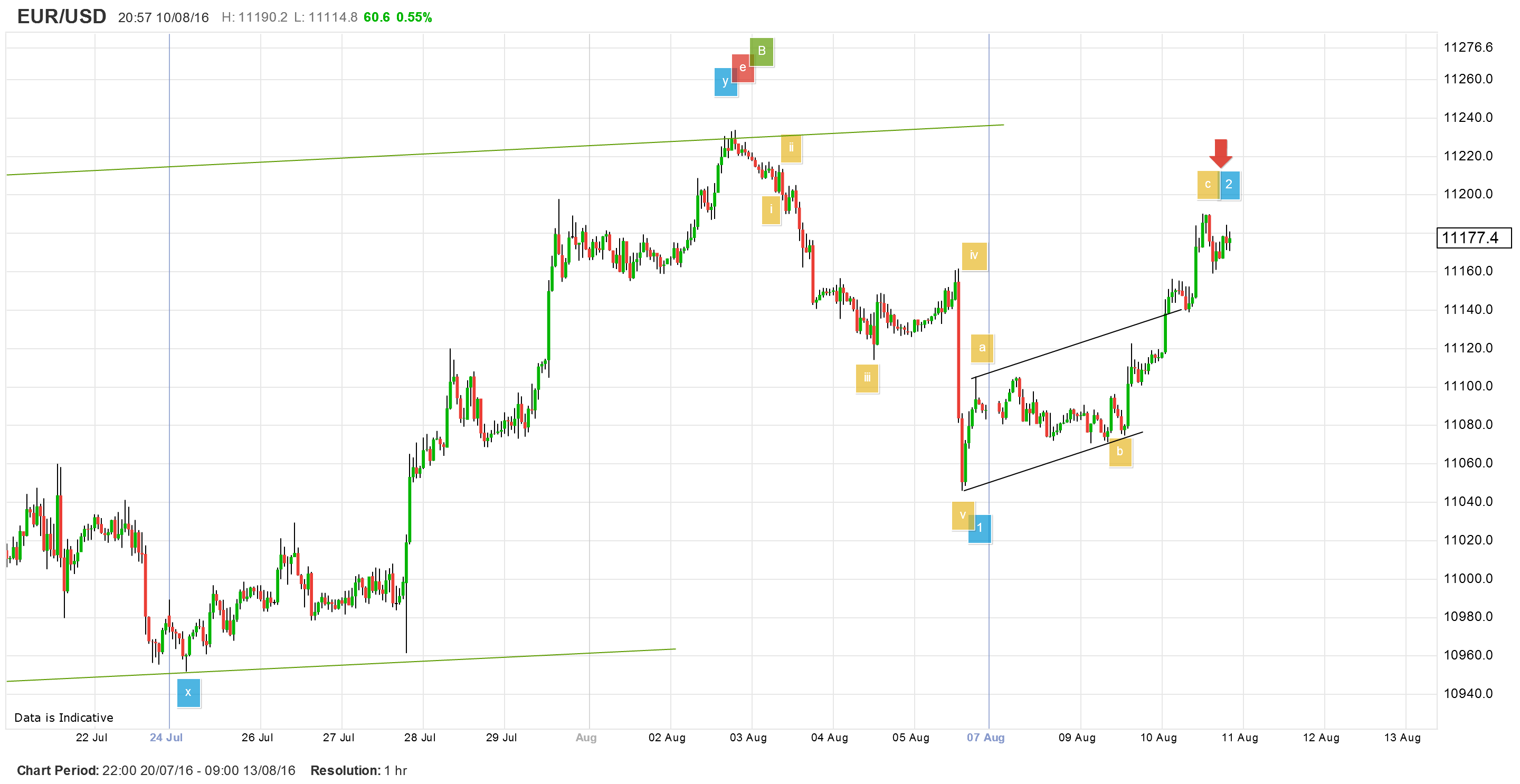 Current wave: Wave 'e' of the large 'B' wave triangle has possibly finished.

Outlook: Lower in wave 'C' green, awaiting a shorting opportunity off the wave 'B' green, high.

Well
The market got a little more active today after a quiet start to the week.
Eurusd did rally up to that upper trend line which I spoke about yesterday.

Given the way that todays rally has popped above that upper trend line, I have altered the wave count labelling to allow for that fact.

It is possible that we are seeing the completion of wave 2 blue here.
the depth of the retracement into the previous decline means that the only viable way to count the current action is a completing 1,2 wave structure to the downside.

This is a pretty bearish setup for Eurusd if this is the correct interpretation!

It means that the price is very likely to fall away rapidly from todays high.

The reward/risk ratio on this trade 290/42, that's 6.9:1
Plus the fact that the longer term outlook is for far lower prices in general.

If this is the turning point in the bigger picture, then we are in for fireworks ahead.

There is of course the alternate interpretation, which is that wave 'e' red of the triangle has not completed yet.
A break of the high at 11234 would mean the alternate count is correct.
If you look at the 10 minute chart I have shown the latest wave up, labelled wave 'c' yellow.

C waves in general are 5 wave affairs, save for a combination type correction.
This particular wave counts as a five wave structure with a third wave extension.

The black arrow would be the centre of the third wave up.

The decline off the top can be counted as a 5 down and 3 up structure.
If that top holds then the risk reward gets a lot more attractive if you are thinking of selling at these levels.

For tomorrow,
I will be watching todays high, if it holds and prices accelerate to the down side then we could be game on!
The critical high for this wave count lies at 11234. 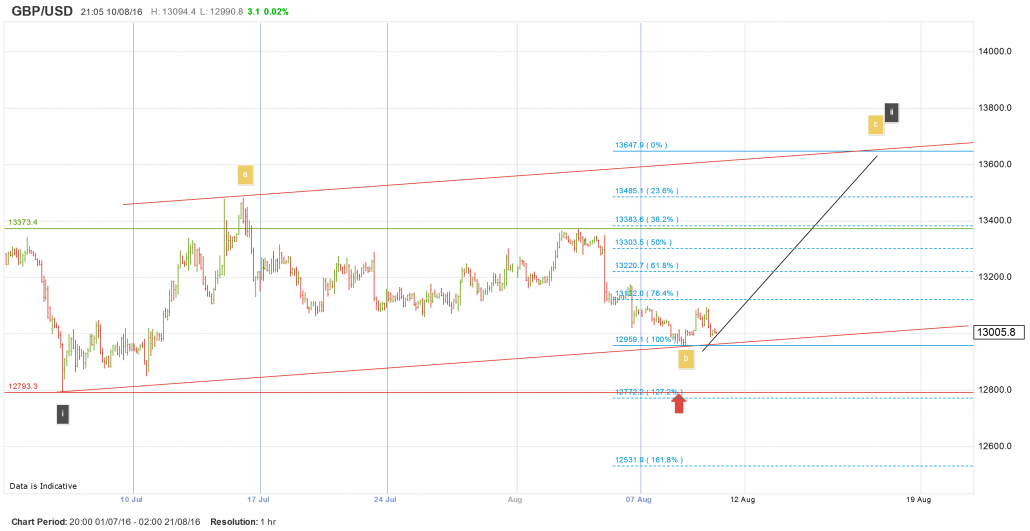 Outlook: lower in wave 'iii' black, with a long way down to go. Possible shorting opportunity at the wave 'ii' black high.

I have bitten the bullet with cable and changed the wave labelling over to the alternate count which I have harped on about so much.
So
as you can see in the hourly chart I am now expecting a rally into the 13600 area to complete wave 'ii' in black.

I have shown the fibbonaci grid which projects a final target in wave 'c' yellow of 13647
so that would be a 640 point rally form the price as I write this.

The form seems to be a simple zigzag correction upwards.
the wave structure for a zigzag is 5,3,5
I can count 5 waves in 'a' up
and 3 waves in 'b' down
So that predicts another five waves up in wave 'c' yellow.

On the ten minute chart I can clearly see a five wave advance off the low,
It is hard to count the decline in three waves but it is possible at a stretch.

I have labelled this structure as waves 'i' and 'ii' grey.

Again if the low has been established at wave 'b' yellow.
The risk at this point is about 53 points.
with the reward being about 600 points.

For tomorrow I will be watching the critical low at 12957.
the outlook is higher in wave 'iii' of 'c' yellow. 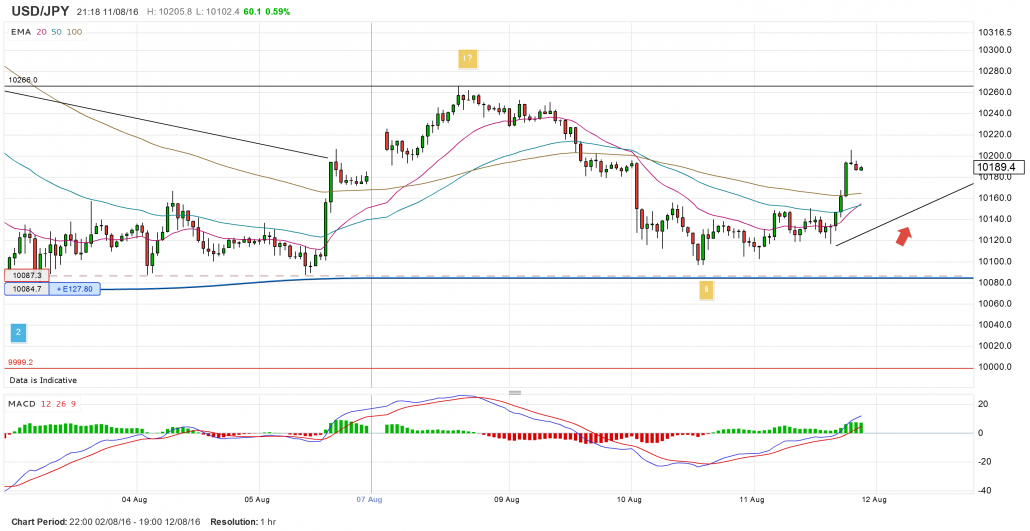 Outlook: Higher, far higher, in a multi month rally which should take prices well above the 2015 high of 12600.

If dollar Yen is going to rally, It better do it soon!

The market has been flirting around with my protective stop all day.
I wish it would just leave me alone!

In saying that the support cluster at around 10100 has proved itself so far.
We will soon see if it stays that way!

For now I have labelled the move off the low as a wave 'i' up. It may be a stretch to count it that way but it is still valid and doesn't break any of Elliott's rules.

In terms of that larger picture, If you look back in your chart, you will see that despite all of the selling
and all of the downward momentum of the last year, the price has basically stalled!
As if to say thou shalt not pass.
So the overall interpretation is holding, so far.

But we are still very close to the immediate critical low at 9999, so some upward movement would be greatly appreciated!
On the ten minute chart there may be a ray of light in the form of the small rally off todays low.
It has the potential of turning point.

For the overnight session, that low of 10097 has got to hold.
the only way that this wave count remains valid from here is that we get a substantial rally.

Where are YOU going when you DIE!

Jesus Gave us the Way to everlasting life:

(John 3;16) For God so loved the world that he gave his one and only Son, that whoever believes in him shall not perish but have eternal life.

For God did not send his Son into the world to condemn the world, but to save the world through him.

If you believe on Him, then you are saved.

Whoever believes in him is not condemned, but whoever does not believe stands condemned already because they have not believed in the name of God’s one and only Son.

Your ETERNAL LIFE depends on it!